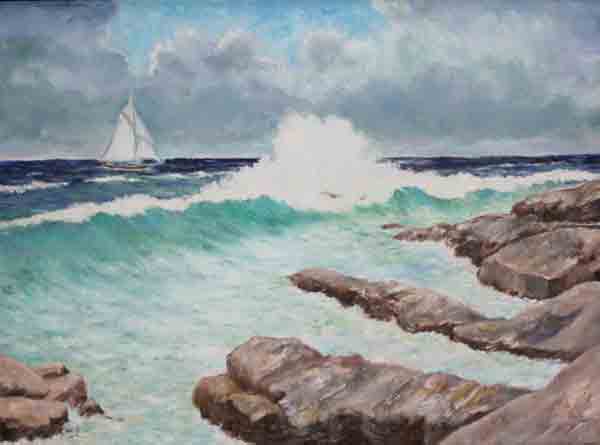 One of my main reasons for becoming an artist is to be a creative person in a useful way by producing great art which can be appreciated by both experts and the general public. I attempt to interest the mind as well as give the viewer a pleasurable experience. I am in agreement with Matisse, who thought that the viewer should be able to relax as in a comfortable armchair. He thought that "decorative" was not a pejorative term. He said that a painting should above all be decorative and need not be disturbing.

This does not mean that a painting cannot be inspiring or thought provoking.  Michelangelo may have been one of the first to characterize the artist as more than a craftsman producing pretty paintings or sculpture,  but as a kind of prophet of a secular religion who channels the most profound aspirations of the human spirit.

Observation of nature through landscape painting is one means of acting out such a role. With an uncanny mimicking of purposefulness, the universe has improbably evolved curious observers here on Earth who perceive their environment empirically through science and aesthetically through the more holistic worldview of art. Landscape is an area in which the artist can act as an observer to evoke what John Muir has described as a “rapt religious consciousness” which, for me, can be kindled by the expansive view of mountains, the vastness of the oceanic horizon or water in motion.

Other areas of interest I focus on are traditional themes having to do with those aspects of the human condition expressed by dance and athletic striving in sports such as Gymnastics and Diving which emphasize grace and beauty.

Dance is one of the highest forms of artistic expression, but it is dependent on other media to capture the fleeting moment of beauty it produces. Mercier Cunningham has characterized dance as giving back nothing to the dancer but a “single fleeting moment when you feel alive”. Painting or sculpture can attempt to capture and preserve for contemplation such fleeting moments of beauty through representation of the human body in graceful motion.

I prefer oil paints as my medium of choice and the springiness of canvas in response to brush strokes as my preferred platform. I rely on variations of color to provide texture rather than use thick paint or the addition of materials such as sand to the pigment. I try not to leave any areas of the painting with solid color. The viewing distance at which one becomes more aware of the brush strokes than of the figurative content becomes greater as the texture of the painting becomes more pronounced. My paintings of dancers, for example, have a coarse textured background, but retain fine detail to represent a likeness so the viewing distance can remain at arm’s length.